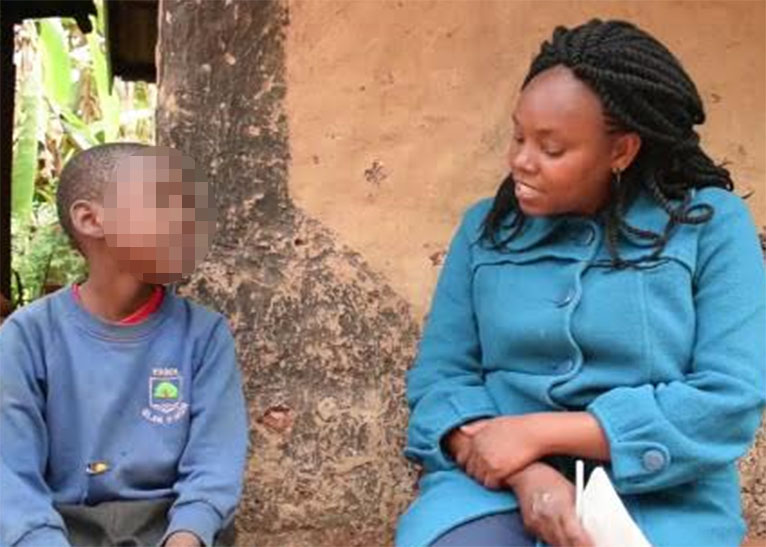 A 29-second video clip of a young boy — seemingly between the ages of 6 and 10 — asking for sexual favours from a woman, who is most likely in her late 20s or early 30s, has gone viral on social media.

Speaking in Kikuyu dialect, the boy says he wants the woman because she is “endowed with a big behind”.

The video, which is supposed to make people laugh, but has turned out to be a moral disaster, was — professionally — shot on a veranda setting at an undisclosed location.

The boy, going by his occasional stammers and flinching, was ostensibly coached on what to say in a bid to make the script produce its intended effect(s).

The video bears the social media handle of one @Felidan.

Below is a transcript of the conversation between the boy and the woman:

Boy:  Madam, I have looked at you, and I have made up my mind that it is you I want.

Woman:  What do you want me for, yet you are a very small boy?

Boy:  You are pretty and, furthermore, you have a big behind.

Woman:  How would you know that I have a big behind, yet I am seated.

Woman:  Which 18 yards are you talking about? You came and found me seated here, it is not the other way round.

Woman:  What do you want me for, young boy?

Boy:  You have a large ‘cargo’ on the back. You’re very well-endowed, and I want to tap those ‘goods’.

Woman:  Which cargo are you talking about? I don’t have anything I am carrying on the back.

The above conversation would not pass for any media programme, let alone be tolerated in any public forum.

According to Kenya’s Children Act, Chapter 141, Section 13, it is illegal for any adult person to subject a child to physical, sexual or psychological abuse.

“Every child is entitled to protection from physical, psychological, sexual, neglect and any other form of exploitation including sale, trafficking or abduction by any person,” says the Children Act.

If one is found guilty of the above offense, the Children Act stipulates a prison term not exceeding 12 months, or a fine not exceeding Ksh50, 000, or both. And that judgement is independent of other laws governing protection of children.

Whether the conversation between the boy and the woman in the viral video clip was scripted or not, what is clear is that the boy was subjected to psychological abuse, and action needs to be taken against the producers of the video to prevent other people from using children in such lewd productions.

Given the video should be classified for consumption by the Film Board, I tried to reach the agency’s CEO, Dr Ezekiel Mutua, for comment, but my phone calls and text to him weren’t returned.

I wish to say it is at such times that Dr Mutua should stand up and be counted.

By doing so, he would be protecting tens, or even hundreds, or even thousands of Kenyan children from exploitation by money-motivated content producers, who only think of how their productions would go viral at the expense of the welfare of children, whose lives continue to be fragile due to constant exposure to programmes that are only good at eroding morality.