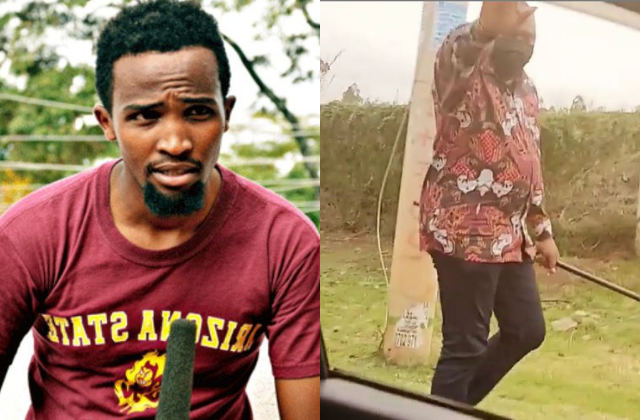 Popular Kenyan actor/director Pascal Tokodi has sent the internet into a frenzy after posting a video of an incident in which he ran into President Uhuru Kenyatta strolling casually on State House Road while holding what appears to be a cane.

Tokodi, in the video posted on his Instagram page on Wednesday evening and that has since garnered over 150,000 views, almost seemingly has no idea how to react as he cannot believe the encounter.

A hysterical Tokodi, who is in the company of a friend in the car, can be heard saying to the Head of State “How are you sir?” Oh my goodness!” while President Kenyatta waves at him.

As he drives off, Tokodi makes a quick plug telling the President to watch one of the TV programs he acts: “Ona Selina! Ona Selina!”

President Kenyatta is seemingly heard saying “Asante. Nimeona,” as he waves Tokodi off.

The actor has since however received some backlash from a section of Kenyans On Twitter who feel like he should’ve used the opportunity to ask the President “more serious questions” such as when the curfew order will be lifted.

Tokodi, in a reaction video posted later on, however rubbished this off saying: “Watu wanasema sijui ningeongelea curfew sijui all these other things…lakini hiyo 15 seconds mimi niliona nijitetee…”