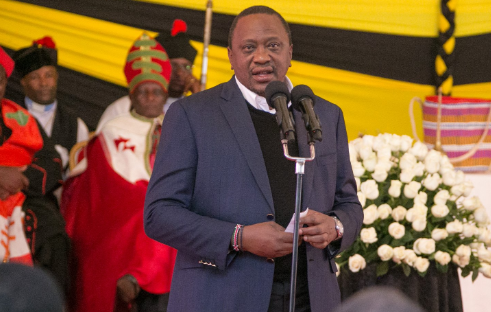 President Uhuru Kenyatta has ordered the Directorate of Criminal Investigations (DCI) as well as the Ethics and Anti-Corruption Commision (EACC) to launch investigations into alleged misuse of funds at the Music Copyright Society of Kenya (MCSK).

This comes following uproar from Kenyan musicians claiming to have recently been sent a paltry Ksh.2,500 by the Collecting Management Organization (CMO) as royalties.

Speaking on Saturday during the burial of popular Kikuyu musician John Mwangi Ng’ang’a alias John DeMathew in Gatanga, Murang’a County, the Head of State noted that the operations of MCSK need to be probed to establish if ther exist any irregularities.

“The music industry has a problem that needs to be fixed. And so I have directed the DCI as well as the EACC to begin investigations and establish if somebody (in MCSK) is misusing funds not meant for them,” said the president.

President Kenyatta also announced that the Kenya Copyright Board (KECOBO) will be moved from the Office of the Attorney General to the Ministry of ICT as part of measures to protect musicians from exploitation.

The President said the ICT ministry is the right home for KECOBO because that is where it can have the ability to monitor broadcasters, telecoms and other entities that use productions by artistes.

He said the Ministry of ICT is under firm instructions to ensure that artistes get their dues such as royalties.

“I have instructed the ICT Ministry to ensure that before renewal of licenses for broadcasters and telecoms they must pay what they owe artistes,” said the President.

MCSK recently came under heavy criticism after Kenyan musicians – led by Khaligraph Jones and King Kaka – took to social networking platforms to blast them for sending ‘peanuts’ as royalties.

The body however later issued a press statement saying the amount issued out uniformly to all its members was only collected in public places – such as salons, barber shops, matatus – adding that it was yet to collect from pubs and restaurants as well as media outlets.