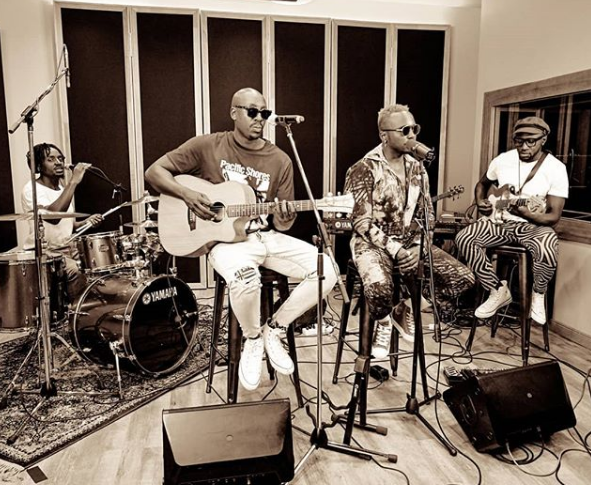 Multiple award-winning Kenyan boy band Sauti Sol have revealed that they had at least 40 concerts cancelled world over when the novel coronavirus struck.

The group makes the revelation in the upcoming episode of their reality TV show Sol Family, created by docu-series genius Eugene Mbugua, which airs on Maisha Magic on Sunday at 7:30pm, and which eDaily has been privileged to preview beforehand.

In the episode, the group’s booking manager Anchie Ng’inja is introduced to viewers and she breaks the news during a crisis meeting held on April 5, 2020.

Band members Bien Aime-Baraza and Savara Mudigi then go ahead to assert that they were set to perform at across 25 venues in the United States and 15 others across Europe in 2020.

Bensoul and Nviiri the Storyteller, artists signed under Sauti Sol’s record label Sol Generation, were also set to undertake their first shows outside the continent this year – in Australia.

All these, according to Anchie, were however cancelled due to the COVID-19 pandemic.

The group however decided to soldier on and transform their studio into a habitable environment for their artists – Bensoul and Nviiri – to both live in and create music during the period of the pandemic.

Anchie, in the episode, also speaks of her experience working under Tanzanian songbird Vanessa Mdee before eventually coming to work for Sauti Sol.

“Vanessa is extremely hardworking, she doesn’t stop, she’s almost crazy and runs on adrenaline. We didn’t even eat much, it used to be work work work,” she said.

“Vanessa fell in love in 2019 and moved to Los Angeles…I have a son, so I couldn’t make the move …so I called Bien and asked if they were looking to hire someone.”