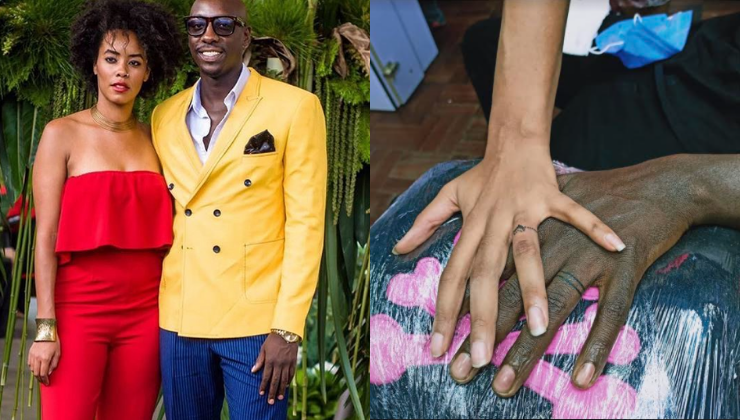 Popular dance choreographer Chiki Onwukwe made her husband Bien Aime-Baraza of Sauti Sol get matching tattoos on their fingers because he kept forgetting to wear his wedding ring when leaving the house.

This was revealed on the third episode of Sol Family season two; the docu-reality TV show that chronicles the lives of Sauti Sol band members and their Sol Generation record label signees.

According to the Dance Shagz founder, her hubby Bien has a low pain threshold but they both had to get the tattoos anyway because of his forgetful nature.

“Bien has a problem with taking off his ring…(so) Bien and I are going to get our tattoos in the place of where our wedding rings are. I love tattoos, Bien has never had a tattoo. Bien is going to scream, and Bien is going to cry, because Bien’s pain threshold is not the best,” she said on the show.

Bien, on the other hand, however, did not feel like getting the tattoos because of his inherent dislike for needles.

“I have to be branded everytime I leave the house. Like, Chiki will remind me to wear my wedding ring when I’m at the parking lot…I need Chiki to understand that my ring is in my heart, my commitment with her is in my heart, I don’t have to go through excruciating pain to prove my love,” said the Sauti Sol lead singer.

“I’m super anxious, I’ve never had a tattoo before, and I don’t like needles. I think needles are crass, I’d rather actually have a whole bucket of pills to swallow.”

Bien ends up screaming and groaning throughout the entire time he is getting his tattoo…just like Chiki had predicted.

Also on the episode, Sauti Sol bandmember Chimano, with the help of his celebrity stylist friend Brian Babu, decides to revamp his whole wardrobe by clearing everything and using his gold card shop for a whole new wardrobe.